This is the sound of something different: headphones with a shape inspired by hearing aids, from a company focused on providing hearing aids to needy children.

Westin Bye and Cooper Buss have been friends since fourth grade who have long talked about starting a company together. Bye, a mechanical engineer, and Buss, with a background in retail, wanted to do something cool, but they wanted to make sure their company had a bigger purpose as well.

Enter Bye’s father, who has worked in the hearing aid industry for years. “They were dabbling in headphones,” Buss says. And then a lightbulb went off.

Meet Life Acoustics and the company’s first offering, the LIFE Headphone. “You haven’t seen headphones shaped like ours before because they don’t exist,” Buss says. The patented shape is curved to fit into the wearer’s ear like a professional musician’s in-ear monitor, hugging the crevices and contours and making it near impossible for the headphones to be pulled out during use. 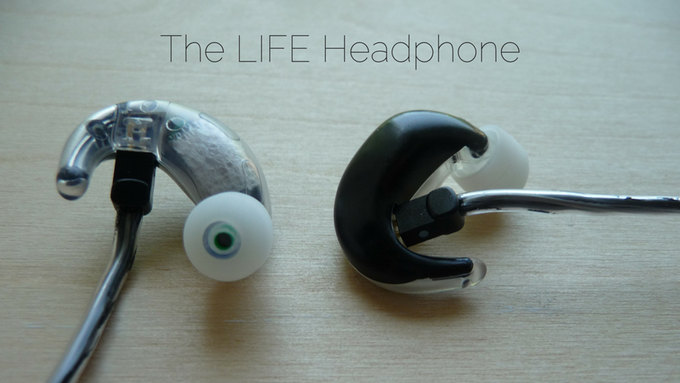 “These things do not fall out no matter what,” Buss says. Anyone who’s worn earbuds knows the annoyance and slight twinge of pain that comes from in-ear headphones falling out easily, or getting ripped out if the cord catches on something unexpectedly. “That was really important to us.”

Speaking of the cord, it’s attached to the front of the headphone and comes out parallel to the wearer’s head, and has a Y-shape to it, providing full range of head motion for the wearer. Should the cord get pulled, the tension is directed in an angle that actually anchors the headphone into the wearer’s ear.

But how do they sound?

A self-proclaimed audiophile who has worked as a sound engineer, Buss says it was of the utmost importance to make great-fitting headphones that outperformed the competition. “The technology in there is totally different from an earbud. The scientific term is balanced armature driver: Instead of speakers shooting sound waves at you, it’s a tiny little driver driven by a magnet.”

The headphones contain two microdrivers, one tuned as a tweeter and the other as a woofer, producing a richer sound than the standard earbud. Early praise for the headphones comes from Head-FI.org, where a reviewer says the LIFE Headphones “have the best sense of stereo imaging and separation that I can recall hearing” in a set of in-ear headphones. “The sense of depth that they provide is astonishing, accurately portraying the distance from listener to instrument, while similarly providing a good sense of space between each instrument.”

He adds that the headphones are wired because they didn’t want to compromise the high-fidelity sound of the headphones, noting that there isn’t enough data available via Bluetooth to send the same quality sound without compressing the audio.

But what Buss and Bye are most proud of is the good work they’re hoping to do as their headphones become available commercially. (A Kickstarter campaign to introduce the headphones has already surpassed its $15,000 initial goal with more than a week left to go.)

For every pair of headphones sold, Life Acoustics can support a hearing aid given to a needy child for two months. The hearing aids are powered by solar energy, giving them a longer life in areas where the nearest drugstore might not stock the impossibly tiny and sometimes hard to find batteries used by standard hearing aids.

Life Acoustics has teamed up with an organization in Arizona that takes several tips each year to a town in northwestern Mexico and distributes hearing aids to children. Partnering with Ayudame a Escuchar– Help Me Hear—means creating a longterm relationship with people who come from hundreds of miles away to get help for their children, who are otherwise unable to interact with people.

In the United States and Canada, there are services to help the hearing impaired, including training and education in sign language, translators, etc., Buss says. Those services aren’t necessarily available in Mexico or other countries. “In Mexico, these kids can’t talk to their friends. They have a hard time making friends (because of their hearing impairment and difficulty communicating). They can’t go to school because they can’t hear anything and there’s no other option for them. Hearing aids turn these kids’ lives around.”

Bye’s father has been involved with the organization that works with Ayudame a Escuchar and makes trips several times per year to donate hearing aids and also make sure the ones already in use are still working properly. Now Life Acoustics is hoping to deepen and extend that relationship as they see some success. “Being a social business is a dream,” Buss says.

“Right now we’re a social business in philosophy. We’re on Kickstarter because we’re trying to be able to sell our headphones and be able to market our headphones. We’re hoping we’re going to be successful enough to donate a hearing aid for every pair of headphones that we sell, but we’re nowhere near that now because of the high cost of tooling the headphones.”

Right now, they’re capable of giving away two months’ of support in the lifespan on the hearing aids. “We’ll see what the future holds for us,” Buss says, but they’re hopeful things will continue to improve.

To get your own pair of LIFE headphones, go here.

Liked it? Take a second to support Amber Healy on Patreon!