Remember the first stereos to have vertical CD players? How they looked somewhat cooler and sleeker than the boring trays? The vinyl resurgence has brought with it not one but two turntables capable of playing records while spinning upright.

They look pretty spectacular, too.

Firstly, we have the incredibly successful Floating Record turntable, a crowdfunded Kickstarter project that met its $50,000 goal within a few hours, nearly doubled that amount the same day, and as of Monday evening had raised an astonishing $793,000.

“Instead of another digitally-enthusiastic piece of ‘high-res audio’ nonsense, this piece of equipment works with audiophile-grade materials for vinyl records. And it plays these records on their side—because any person willing to take the time to pull a record out of its sleeve to play music can also appreciate the awesomeness of seeing said record play on its side,” writes Chris Burns over at Slashgear.

This turntable has built-in speakers and the ability to transmit to speakers via an RCA line-out.

There’s also Toc, another vertical record player designed by Roy Harpaz that can be controlled by remote or with LED touch buttons built into the front of the almond-shaped turntable. Its design allows for users to skip tracks, but it’s also capable of playing warped records. ​​​​ 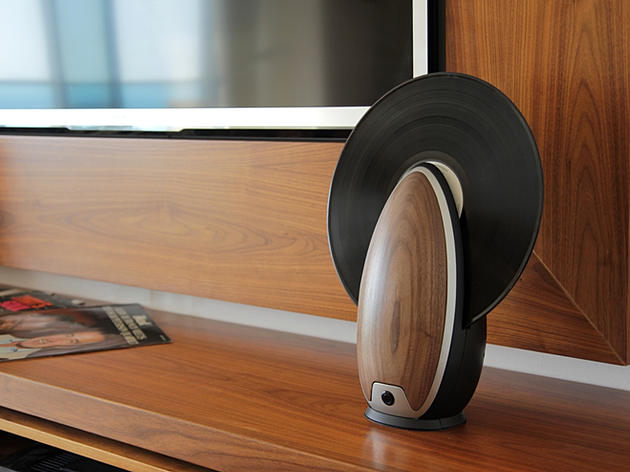 “‘TOC’ is also comes with a built-in carbon fibers brush that captures dust thus stylus stays clean,” Harpaz says on his website. “Besides enjoying the sound of the record playing and the viewing of the spinning record, it becomes an interesting conversation piece and unique accessory to any home. Its front panel is made from CNC-cut walnut wood and is a great addition to any room in the home. Even when a record isn’t playing, the ‘TOC’ vertical record player can stand alone as an interesting piece of creative design.”

The inspiration for this futuristic turntable’s design is prehistoric, stretching back to the Mesozoic era.

“This era is divided into three periods; the Triassic period (“T”) and the Cretaceous period (“C”), which represents the beginning and the end of the Mesozoic era and the Jurassic period which was the most prolific period for the dinosaurs,” he explains. “This period is represented with the letter ‘O’ and the ‘TOC’ shape, which symbolizes the amniotic egg.”

Needless to say, these turntables will probably be on the top of the Geeks & Beats wishlist this winter.

Liked it? Take a second to support Amber Healy on Patreon!