Identifying a band or a solo artist by their album cover is something to take hold of, especially if the cover doesn’t feature the name of the album or the artist(s) name(s). The cover alone then becomes a piece of art on its own merit but that cover has to stand loudly as it more likely will be compared to the music itself. Will image only albums stand the test of time as masterpieces? The majority of them do.

Here’s the top 10 image only albums that went pretty far and one or two that killed the band.

White Blood Cells was the breakthrough album for the White Stripes. It was only their third record release but Jack and Meg felt confident enough that no words were needed for their front cover.   The White Blood Cells cover depicts the duo getting attacked by a clan of people wielding TV and video cameras. The clan of people surrounding the White’s are the music industry executives and the promotion people who want to supposedly expose them to the world. Well, it worked. Rolling Stone ranks White Blood Cells as their 497th favourite album on its list of the 500 Greatest Albums of all time. Their 5th album Get Behind Me Satan
and Jack White’s first two solo albums, Blunderbuss and Lazaretto were also image only albums (as well as The Raconteurs’ second album, Consolers of the Lonely)  so we can see Jack White is confident in his image-only artwork.

Are the Arctic Monkeys following in Jack White’s footsteps? Their latest image-only cover release, AM was critically acclaimed making 449th place on NME’s 500 Greatest Albums of all Time. The high radio frequency waves album art were enough to propel the Arctic Monkeys into one of the most popular rock bands in the world. I’m sure the music on AM helped them out a bit too.

Debuting on the Billboard 200 at number two, Arcade Fire’s Neon Bible was a prime example on how far indie bands can push the envelope especially when it’s image-only art that’s found on the front cover with this being only their second record. The album artwork won the 2008 Juno Award for best CD/DVD Artwork Design of the Year. Their latest effort, Reflektor also bares no names on the cover. Coincidence?

These weren’t the best STP album covers and sadly they may be the last from the band featuring Scott Weiland on vocals. Although the image-only cover artwork isn’t terrible, the music was lackluster and didn’t offer the heavy hits that made Stone Temple Pilots popular in the 90’s. It just goes to show you that image-only cover albums don’t work for everybody. 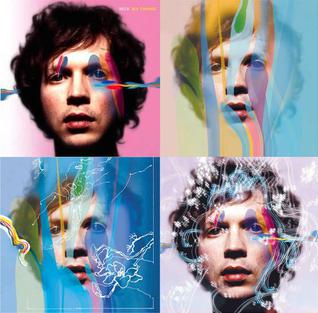 The album art is featured on t-shirts around the world. When reviewing the 2007 remastered version of Unknown Pleasures, Pitchfork Media critic Joshua Klein described the cover art as “iconic”. BBC Online reviewer Susie Goldring, says the duochrome Peter Saville cover of this first Joy Division album speaks volumes. “Its white on black lines reflect a pulse of power, a surge of bass, and raw angst,” says Goldring. “If the cover doesn’t draw you in, the music will.”

Even though Rolling Stone ranked it 55th on its list of the 500 greatest albums of all time, the album art was surprisingly controversial to Jimi Hendrix. Hendrix had written to Reprise records describing what he wanted for the cover art, but was mostly ignored. He asked for a color photo by Linda Eastman (Paul McCartney’s future wife) of the group sitting with children on a sculpture from Alice in Wonderland in Central Park, and drew a picture of it for reference. The company instead used a blurred red and yellow photo of his head, taken by Karl Ferris.

Even though he was displeased with the outcome of the album cover, the Electric Ladyland album is regarded as one of the most iconic (double) rock and roll albums of all time.

Toronto’s Death From Above 1979 don’t like their album art direction to sway too much from record to record. Even though they only have two albums, they must really love those image-only elephant noses. With only the backdrop being changed from their first album 10 years ago, DFA 1979 and their elephant noses seems to be addicting to please the masses. Personally, I have an elephant nose hanging from my rear view mirror so I suppose elephant noses will never go out of style. It looks like their music won’t either.

Is there anybody out there who doesn’t know who this is just by looking at it?

The first idea for the cover of the Beatles’ Abbey Road album was to call it Everest, after the favourite brand of cigarettes smoked by their engineer Geoff Emerik.

With the thought of doing a Himalayan cover, the idea was killed by the group, and instead they considered doing the shoot closer to home.

“There’s a sketch Paul McCartney did with four little stick men crossing the zebra,” says Brian Southall, author of The History of Abbey Road Studios who was interviewed by BBC News.

On August 8th 1969, the Fab Four walked out of No 3 Abbey Road, having finished basic work on what would become their most popular album.

The photographer who took the famous cover shot was the late Iain Macmillan, a close friend of Brian Southall, who came to know The Beatles through working with Yoko Ono.

“He was given about 15 minutes,” says Southall. “He stood up a stepladder while a policeman held up the traffic, the band walked back and forth a few times and that was that.”

Macmillan only took up to eight pictures and that was a wrap.

From Atom Heart Mother (1970) to The Final Cut (1983) Pink Floyd dominated the image only album covers for a total of eight straight albums. Unfortunately after The Final Cut,  Roger Waters left the band leaving Dave Gilmour to carry the rest of weight on lead vocals. Next month however, we’ll see the release of a new Pink Floyd album, the first in 20 years called Endless River which looks as though it’ll be an image-only album as well. Can the album art alone have the potential to be recognizable for Pink Floyd fans to be purchased to make it a successful album? We’ll have to wait and see.

Liked it? Take a second to support Matthew Smith on Patreon!

It wasn’t all that long ago when vinyl made its comeback.  Yet, looking at the Canadian landscape...